But again for this report, no one believes the StatsCan canola number, canola down 4.6 ten minutes after the report 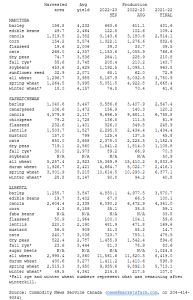 Wheat futures are adding to prices amid concern about US 2023 HRW crop weather is dry and the potential closing of the Ukraine export corridor.

US export prices are higher than Russia but so far, Russia wheat exports to date are slower than needed to reach USDA goal.

Soybeans continue to drive what there is for overnight trade volume, hanging in there after punching through $15 for 2 1/2-month highs yesterday

Corn and wheat remain on edge near recent move highs as well.

Transportation issues are now at the forefront post-USDA, that might go double for fertilizer, not just grain.  With the trade watching U.S. rail development closely, and Putin continuing to criticize Ukraine grain shipments while the U.N. tries to broker a deal for Russia ammonia exports through Ukraine.

Taiwan bought 65k tonnes of corn from Brazil in an international tender closing this morning, for November-December shipment.

Sources reported that multiple U.S. railroads will halt shipments of crops or fertilizers today, a day ahead the potential railway strike; railroads have until a minute after midnight on Friday to reach a deal with 60,000 union workers.  The US government is “looking into it”, still holding the ability to avert a strike; there is also reports from the Union side that the two sides are “not that far apart” in their negotiations over pay and attendance policies.

Wheat Up Nearly 5% On Friday... Previous
World Q3 Wheat Exports Are Down 9 MMT... Next