Wheat futures settled midrange overnight +13.50 for WZ as comments from Putin over the grain corridor added risk premium back in to the market.

The Russian President reiterated Ukraine wheat was going pass the poorest countries, describing it as a ‘swindle’.

Matif also enjoyed a higher session +4.25 for the Dec contract and momentarily making new monthly highs during the day’s trade.

Putin also commented Russia is set to harvest a record 100mmt of wheat with the country already passing the milestone the week ending 26 September and 101.3mmt already harvested at around 95% complete.

Aussie FOB prices were a little softer yesterday with WA APW for Jan at high $350s although CFR SEA values remained around $380-385/mt.

Corn and soybeans posted solid overnight trade volume but it’s wheat that’s holding up the complex this morning with commodities overall still facing massive headwinds from that surging USD. Grain exports are still flowing out of the Black Sea region but the trade remains on edge as the war continues

Importers from the Philippines have tendered for 45-50k tonnes each of feed wheat and feed barley, for Jan-Feb-March shipment.

Algeria has issued an international tender for a nominal 50k tonnes of wheat.

Argentina’s Ag Ministry reported farmer sales of the 2021/22 soybean crop at 65%, behind last year with sales slowing into the end of September when preferential exchange rates expire.  Corn sales for 2021/22 stand at 67%, up from 62% at this point last year.

U.S. Ag Secretary Vilsack yesterday said talks with Mexico are continuing regarding their looming GMO corn ban; Mexican officials seem to be doubling down on the decree that phases out GMO corn and glyphosate by 2024.

European Commission data showed cumulative soft wheat exports since July 1 at 8.80 MMT, up from 8.75 MMT through Sept 25 last year; corn imports of 6.65 MMT are up from last year’s 3.67 MMT pace.

Brazilian grain exporting association Anec yesterday estimated September soybean exports at 3.82 MMT, down from 4.15 MMT seen previously, with corn at 7.13 MMT, down from 7.62 MMT last week.  BRZ meal exports of 2.01 MMT are down from last week’s 2.225 MMT estimate as well.

Wheat finished the week lower on Friday as exports from Ukraine’s Black Sea ports continue despite Russia’s mobilisation of an extra 300k troops.

CBOT(Z) finished -30.25c for the day however for the week still finished in the black +20.75c with ample risk premium priced in earlier in the week.

In cash markets, Philippines PAFMI were heard to have booked 1 45k ASW/FW cargo in the mid $350s for a Jan shipment.

Despite the ongoing conflict, Russia could harvest a record 100mmt this season, although the wheat is expected to pile up due to sanction induced reduced access to export markets.

Taiwan millers are seeking 52k tonnes of U.S. milling wheat this week, in a range of different types for November shipment.

Pakistan is seeking 300k tonnes of wheat in a tender closing today, though they only got one participant with a low offer coming in at $399/tonne C&F

The U.N. issued an international tender for 100k tonnes of milling wheat, for donations to countries in Africa, Asia, and the Middle East, for Oct-Nov.

Soybeans led what there was for overnight trade volume, off evening highs but finding technical support and holding up the grain complex at this point.

Fundamental news is likely to be light this week but we should start to get anecdotal yield reports as combines ease into the fields.

Wheat is the anchor to start the week with Russian production and exports rolling.

Saudi Arabia bought 556k tonnes of wheat in their international tender that closed on Friday, at an average price of $372/tonne C&F for Nov-Feb arrival from EU, BS, NA, SA and Aus.

Pakistan has issued an international tender for 300k tonnes of wheat for Oct.

Bangladesh cancelled their international tender for 50k tonnes of wheat.

Russian consultancy IKAR once again raised their 2022 wheat production estimate, to 99 MMT, with up to 47.5 MMT potentially available for export.

Russia’s SovEcon estimated September grain exports at 4.85 MMT, up from 4.20 MMT in August, with wheat at 4.3 MMT versus 3.5 MMT last month.

Ukraine’s Ag Ministry this weekend reported a total of 165 ships containing 3.7 MMT of agricultural products have left Ukraine under the joint agreement with the U.N. and Turkey as of Saturday, with another ten ships at 169k tonnes set to leave yesterday.  Cumulative grain exports since July 1 stand at 6.36 MMT, down 46% from last year’s pace, and including 3.72 MMT of corn, 2.06 MMT of wheat, and 557k tonnes of barley.  The Ag Min expects September grain exports to hit 5.4-5.5 MMT, up from 4.5 MMT in August.  They left their 2022 grain production estimate unchanged this month at 50-52 MMT, down from 86 MMT last year. 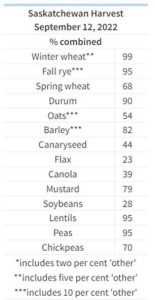 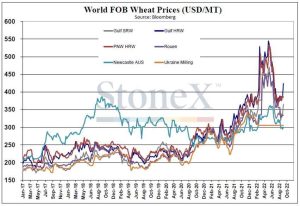 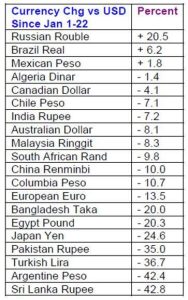 The trade (and the government) has its doubts about the size of 2022 U.S. row crops but ultimately won’t be able to verify until combines get into the fields

FranceAgriMer finally published an unchanged corn condition ratings week over week, at 43% good/excellent this week, that compares to 89% at this point last season.  The harvest advanced from 5% to 14% this week, with the 2021 corn harvest having yet to begin at this point.

The chief agronomist for the Rosario Grains Exchange said that they would likely cut their 2022/23 corn planted acreage estimate in their monthly report next week, currently standing at 8.2 million hectares (20.3 mln acres), due to widespread drought causing “the worst planting scenario in the last 27 years.  Some towns had their lowest June-August rainfall since 1933.