Coming out of the August long weekend, canola prices lost approximately $45 per ton, despite above-average temperatures in Alberta

Decent weather conditions in Western Canada put pressure on the canola market as temperatures in Manitoba are not expected to exceed 30 degrees Celsius this week.

Crude oil was slightly higher on Tuesday as recession fears and uncertainty over this week’s OPEC+ meeting outweighed weakening demand.

Soybean oil was down, while European rapeseed was entirely higher and Malaysian palm oil was mostly higher.

The first shipment through the Ukraine grain corridor as well as Pelosi’s arrival in Taipei (Taiwan) continued to pressure US ag markets lower overnight which saw CBOT(U) -25.50c at the close.

Marine insurers have advised there still needs to be procedures worked out for vessels and crews ensuring safe passage through the new export corridor which are yet to be resolved.

Russian wheat quality has taken a hit this season as untimely rains have put a dent in protein/gluten levels out of the world’s largest wheat exporter.

India is now looking likely to lower wheat import duties after a heavy front end export program precipitated a sharp rally in the price of local wheat.  This would come after only months earlier talking of ‘feeding the world’.

For an overall hot and dry summer, those scattered (and sometimes decent) rain chances continue this week as corn finishes up pollination and soybeans start to mature.  That is keeping the bears hopeful that U.S. crops will find enough just-in-time rains to produce decent yields; exactly what happened last year; and keep S&D tables stocked adequately.

Taiwan’s MFIG bought 55k tonnes of South African feed corn in their international tender closing this morning, for Oct-Nov shipment; eight offers from South America were beat out, with no offers reported from the U.S.

Tunisia’s ODC has issued a tender for 100k MW for Aug-Oct shipment to be concluded today.

Iran’s GTC issued an international tender for 60k tonnes of milling wheat for Sept-Oct shipment, with a deadline set for today.

Algeria started buying optional origin milling wheat in an international tender yesterday, at $384/tonne C&F for Sept-Oct; they were believed to have wound up buying a total of 720k tonnes.

Russia’s Ag Ministry reported the country’s grain harvest at 51 MMT as of yesterday, including almost 44 MMT of wheat, with yields rising across the country; overall grain production is seen at 130 MMT in 2022.

Romania reported the country’s wheat harvest at 96% complete, saying the crop is large enough to cover domestic needs and ensure an export surplus. 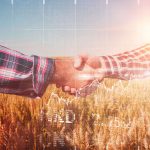