Canola came in lower than the estimates.  If the trade believed that, I would think that the Jan/Mar spread would have ran back up, no change on the spread (+2.4) since the report was published

Spring wheat came in right in the middle of the estimates 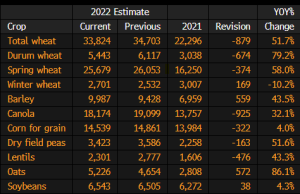 Canola, rapeseed, soybeans and soybean oil got smacked yesterday as spec longs bail hard on the EPA’s proposal for Bio-diesel that was quite disappointing as it only slightly raises the biomass-based diesel blending mandate slightly over the next three years, rising from this year’s 2.76 billion gallons to 2.82 billion in 2023, 2.89 billion in 2024 and 2.95 billion gallons on 2025.  Some will argue this is mostly a moot point, though, as biodiesel production in 2022 is already expected to exceed 3.0 billion gallons, above the blending proposal for 2025 and supported by the incentives included in the Inflation Reduction Act.  On the other hand, though, the proposed levels essentially eliminate the “guarantee” of market ideas for a potential multi-billion gallon increase in biodiesel (including renewable diesel) production over the coming years heavily as discussed in the market of late, but supplying a floor for blending instead.  Demand and profitability appear likely to be the driving factors for biodiesel in the coming years rather than government mandated blending levels.  January, March and May soybean oil closed limit down, December being in delivery has no limit, closed 689 points or 6.89 cents/lb.

Importers in Thailand reportedly bought around 123k tonnes of feed wheat yesterday from Australia, at $349/tonne C&F for both Jan and June shipment.

The B.A. Exchange has the ‘22/23 Argentine wheat crop at 12.4 MMT, but is warning of further reductions due to lower than expected yields during harvest.  The crop was initially estimated at 20.5 MMT in May.  Harvest progress stands at 23% this week, vs 45% last year.  Argentine soy planting hit 29% done, down 17% from last year, with corn planting reaching just over 25%.